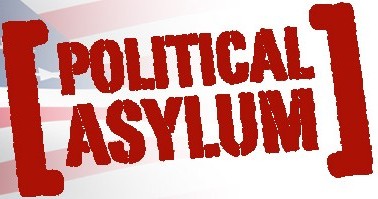 What?  I cannot hear you.  Well, if that’s the case, head to the United States!

In the United States, a foreign national may seek and be granted political asylum (which eventually leads to permanent residence, and often citizenship) because he or she has suffered, or fears suffering in the future, persecution based on:

Membership in a particular social group

Persecution is the systematic mistreatment of individuals or groups based on these listed criteria.

Requirements for asylum seekers have been interpreted broadly over the years – sometimes good, sometimes not-so-good.  The freedoms and protections afforded by the United States Constitution and its laws indeed protect those worldwide who truly need protection from legitimate persecution.

But, during the Obama Administration, asylum has taken a turn.

Asylum is being granted to more and more foreigners not qualifying under any of the above-listed categories.  Among those being granted asylum for previously unaccepted reasons include foreigners such as women seeking protection from abusive spouses, men and women seeking protection from drug cartels, gays and lesbians seeking to live in a more “accepting” society (even when fleeing from countries not considered hostile to them).

Don’t be mistaken – political asylum is a useful tool to protect those truly persecuted . . . but, asylum laws are being exploited to allow more and more people into the country, on non-traditional and not-allowed asylum grounds.

Now, comes news on www.fusion.net that immigration lawyers are trying and winning cases for asylum applicants based on a novel new idea – deafness.

The deaf and hearing impaired are now seeking asylum in unprecedented numbers.  This writer harbors no animosity toward those who suffer from such disabilities, but wonders how fear of persecution fits in, and where it qualifies.  Is deafness a race?  Is it a religion?  Is it a nationality?  Is it a social group?  Is it a political opinion?  (Well, arguably, for some it may be a political opinion – our legislators suffer from a form of hearing impairment – they refuse to listen to their constituents!)

No, deafness is none of these.  It is a disability, most definitely, but it does not create the social group that immigration lawyers and judges are claiming.

Deaf individuals may experience certain forms of discrimination and physical suffering, but is this persecution?  Are these people systematically mistreated in a way that only the United States government can protect?  Is their only recourse a permanent relocation into the United States?

The answer is a resounding no!

The Obama Administration (which includes immigration judges and prosecutors), lawyers and so-called civil rights groups seek day and night to redefine long-standing rules and requirements for asylum, as they do in so many other areas of the law.

Changes and interpretations such as these rarely are rescinded, so they must stop.  Now.

Call your Congressman.  Call your Senator.  Tell them to stop Obama’s unconstitutional usurpation of Congress and the rule of law.  If they will not listen, campaign against their reelection.  Make your voice heard.

Obama, liberals, Democrats, many Republicans, and progressives seek to change this nation one small change at a time.  This addition of deafness as a social class for seekers of asylum is just one of these small changes.

What do you think?  Does this matter?  Are these small changes, enacted and interpreted by Obama and not Congress contributing to the declining morale and disregard for the rule of law in this nation?

Share your opinion on this very important matter please!